EVER TRIED TO HIT A MOVING TARGET AT TWENTY PACES WITH A COLT 45? 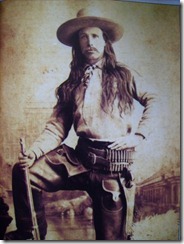 In the movies, the marshal steps out from behind the big rock, draws his Colt .45 and enforces the law by dispatching a few outlaws as they dive for cover 20 or 30 yards away.

In real life it was not as simple as that.

About 40 years ago I read a tremendous book by Earl Forrest about a feud that took place in Navajo County, Arizona in the 1880s.

The feud was between two families. The cattle-herding Grahams and the sheep-grazing Tewksburys. The feuding carried on for more than a decade and only ended when most of the protagonists had been killed.

Enter the splendidly named Commodore Perry Owens (that’s a photo of him, above). Commodore was his first name, not his job role – his mother named him after Commodore Perry, who defeated the British naval forces in 1813. Owens was sheriff of Navajo County at the time of the Graham-Tewksbury feud and took it on himself to sort out some of the key players and restore law and order in Navajo County. He did this in style, killing a number of the feuding parties in the famous Pleasant Valley gunfight (including a 14 year-old who picked up his dying brother’s Colt .45 and aimed it at Owens) and pursuing others incessantly.

What’s the point of this story?

The point is that Owens knew the limitations of a Colt .45 when a moving target was involved. He was in the habit of approaching potentially difficult situations with a Winchester rifle and two 12-bore shotguns along with his Colt .45. And he used each as needed. The best tool for any particular job was brought into action as appropriate and as quickly as possible. His arsenal was comprehensive and innovative for his day.

What L&D can learn from Commodore Owens?

The challenges facing everyone involved in the world of learning and performance improvement are not unlike those that faced Commodore Owens in the 1880s. We’re dealing with multiple competing pressures, variable terrain, sometimes difficult stakeholders, and an unprecedented amount of rapid change. A single-shot solution can never be the answer, rapid fire from multiple weapons is absolutely necessary.

All L&D practitioners need to adapt their approaches to fit specific needs, use the best tools for the specific job, and always be on the lookout for efficient and effective ways to deliver results. Most of all, L&D needs to focus on the ends rather than the means. On the impact and result, not on the process.

Like Owens, L&D needs to think and act strategically,and often needs to take difficult steps in order to achieve its ends. L&D professionals don’t need to gun down teenagers (!), but will certainly need to leave behind processes and approaches that were developed for an earlier age – the steady-state industrial type of organisations that are breaking down or transmogrifying before our eyes.

Sometimes L&D departments may also need to leave colleagues behind if they can’t, or won’t, join them on their journey to adapt and adopt the changes that are clear and necessary if they are to remain relevant and provide strategic value to their organisations. 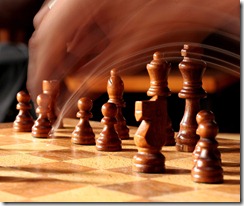 Like Owens, L&D needs to continually demonstrate its value through the best possible actions and solutions it can muster.

It has to respond rapidly, be quick on the draw, and L&D professionals and suppliers need to be more than one-trick ponies. They must focus on whether (and how) they can partner with their business colleagues to help them solve their business challenges with innovative business-led solutions.

If L&D departments and their ecosystem of suppliers and consultants can swim out of the whirlpool of increasing demands having proved their strategic value to senior leaders, they will flourish. If they can’t, they’ll simply prove the premise that L&D is irrelevant in the brave new world of constant change. If this happens, CLOs should expect their budgets to be slashed, their scope to be limited, and for their departments to whither into oblivion.

If L&D vendors can’t adapt to the changing demands that are clearly starting to occur, then they should expect diminishing requests for engagement, smaller contracts and financial difficulties.

Everyone needs to change. And change now.

How Do We Know When L&D is Providing Strategic Value?

The question of the potential and actual value that L&D can contribute to organisations has been discussed and analysed at length over the years. Some good investigative research into strategic value has been published, such as the The C Level Perceptions of the Strategic Value of Learning report by Tony O’Driscoll, Brenda Sugre and Mary Kay Vona for IBM and the ASTD some 5 years ago and The Value of Learning:From Return on Investment to Return on Expectation by the UK Chartered Institute for Personnel Development (CIPD) published in November 2007.

Although the work for both these reports was carried out some years ago, there’s no evidence or reason to believe the situation they found has changed. They both point to some important challenges and failings in the standard L&D approaches that have been used for the past 30-40 years at least.

The IBM/ASTD Strategic Value of Learning study found clear blue water between senior leaders’ expressed requirement for L&D to help them prepare for future challenges and Learning leaders’ (CLOs or Learning Directors/Managers) focus on moving up the value chain from learning to performance and talent to address current challenges. There was a chasm between the current focus (tactical) mindset of L&D and the future focus (strategic) mindset required by senior business leaders.

The CLO focus in this case – i.e. catch the balls as they’re thrown over the fence and run with them – is understandable but it’s certainly neither an optimal nor sustainable strategy. Most CLOs and senior L&D managers have a lot on their plate meeting existing stakeholder demand for training. If they don’t have solid analysis processes in place to qualify, prioritise or reject any ‘training problem’ that a manager might bring to them they are likely to be drowning pretty quickly.

If CLOs focus on learning – which in the majority of cases means the production of content-driven formal classes and eLearning – then the move to performance and talent-centric focus alone is likely to consume all of their time and resources, with no time to think about the future.

CLOs and their L&D teams need to move beyond a focus on learning to focus on solving business problems in close partnership with their stakeholders. There’s no other option. If L&D leaders and practitioners can’t do this it’s almost a certainty that their function will become irrelevant very quickly.

The IBM/ASTD Strategic Value of Learning study also found that there was a discrepancy between senior executives’ absence of need for direct evidence of L&D’s contribution to organisational outcomes and CLOs’ increasing focus on providing proof that their teams’ efforts provide value.

This is a chasm between the faith of senior leaders that L&D will do a good job and CLOs’ need to provide proof that they are doing a good job by carrying out more and more complex and sophisticated ROI calculations and developing more and more spreadsheet models and pie charts to deliver the message.

The message here is that CLOs and their L&D teams need to get over trying to ‘prove’ their value, and focus instead on keeping their customers satisfied. The value of L&D will be determined by its stakeholders and customers, not by L&D itself. In any transaction or service the seller may set the price, but it’s always the customer who determined the value. L&D services are no exception to this rule.

The CIPD Value of Learning study mirrored the earlier IBM/ASTD work. It found that managers are more interested in Return on Expectation (ROE) than Return on Investment (ROI) figures from the L&D department. ROE is based on whether the initial expectation of the stakeholder/customer has been met, rather than on some convoluted spreadsheet analysis ‘proving’ causal chains and returns.

All this leads me to wonder whether the best strategy for CLOs, L&D practitioners and providers into the ‘learning marketplace’ who are finding it difficult in moving from the world of ‘push’ L&D to the world of ‘pull’ L&D is for them to seek out some well-known pharmaceutical products for assistance. These might help them break out of their current mindsets and set them on the best path to face the future.

Clearly it needs something dramatic. Other approaches seems to have failed. Many learning leaders and providers still think that evolution from old to new is the answer.

Evidence suggests it isn’t. There is a revolution occurring in the workplace, and revolution in the way organisations are finding they need to organise and operate to be successful in the interconnected ‘pull’ marketplace we are all living and working in.

The Benzodiazepine drugs Rohypnol (also known as the ‘forget-me pill’ well known to date-rapists) and Versad, which is used to induce amnesia following medical procedures, come to mind.

I’ve had the pleasure of having been administered Versad couple of times. It’s marvellous. The effect is that you lose short-term memory of your life for a few hours or so. It’s like you fell into a black hole until the drug effects wear off. You can’t remember what you did and how you acted (or what was done to you). You come out with no recollection of previous actions and activities during the time you were under its influence. It also sets you up to ‘clear out’ past approaches and start anew.

Which is why I’m wondering whether it will do the trick and enable the revolutionary change that is absolutely necessary if L&D departments are to remain, or become, relevant as strategic drivers for their organisations.

Something radical is certainly needed.

Which brings me back to Commodore Perry Owens. Owens understood the need for radical action even if it involved shooting a young boy and facing down what was previously seen as insurmountable odds. He wasn’t tied to past practices or tools. Owens would have been an advocate of learning being part of the work rather than learning being treated as something in its own right, being separate from work. He would have sought out the best tools and practices to attack the specific problem he was facing at the time. He wasn’t bound by convention. Have a look at his photograph – chest-length (red) hair and a hat that was more Mexican immigrant than cowboy. Owens also understood that sometimes you have to break conventions to get the job done. He also understood that the focus should be on action rather than process, and that doing the right thing for the community is the most important outcome for all.

It’s the same for all of us involved in helping individuals and organisations build and maintain performance, productivity, innovation and quality.

We need to leave old approaches behind and adopt emerging and emergent ones if we’re to deliver real value. And we’d better do it sooner rather than later if we’re going to keep ahead in a fast-changing game.

ConsultMember of the Internet Time Alliance and Co-founder of the 70:20:10 Institute, Charles Jennings is a leading thinker and practitioner in learning, development and performance.