The Higgs boson of Training & Development? 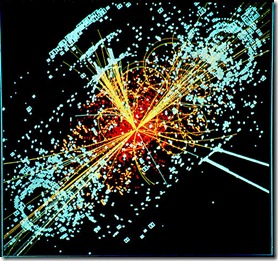 Yesterday, scientists at Europe’s CERN research centre announced that they have found a new subatomic particle that behaves like the much sought-after Higgs boson, the ‘god particle’ (or ‘goddamn particle’).

The discovery of this elusive,  ethereal particle represents a major breakthrough in our understanding of the universe.

So what does this have to do with the learning and training world?

Listening to the announcement from CERN yesterday made me think how a better understanding of our world helps us act in different and improved ways – and that maybe we should be doing things differently in our attempts to help organisations and people learn, develop and perform.  After all, some 22 years years ago we found the Higgs boson of the learning and development world.

The Atom – indivisible, indestructible, with hooks.
Thinking back to yesterday’s momentous announcement, I started pondering earlier discoveries in the field of particle physics that had led to enormous changes the world and in the way we work due to inventions built on the back of them.

JJ Thomson’s identification of the electron in 1897 gave a huge boost to our understanding of electricity, and allowed the inventions of Edison, Tesla and others to be turned into the electronics industry that drives almost everything we do in the world today. New Zealander Ernest Rutherford’s work on atomic structure at the Cavendish Labs in Cambridge in the early years of the 20th Century built the base for nuclear physics and the development of atomic power (and atomic weapons) and a lot else – including the humble smoke detector with its ionising chamber.

All very interesting, but what about the learning and training world (again)?

Well, some earlier work at CERN in 1990  by Tim Berners-Lee and Robert Cailliau led to developments that changed the way people communicate, collaborate and learn for ever. You’re reading this only because of their work. Berners-Lee and Cailliau changed the face of commerce and almost every walk of life with their invention. Yet many learning and training practices that are still being used in organisations around the world seem to be ignoring this fact.

Schrödinger and the Training World
The invention of the Web should have been equivalent in the training world of the collapse of Schrödinger’s wave function (he of the ‘cat in the box’ of particle physics) and a total re-think of how we should do things.

The idea that learning is best carried out by removing people from the workplace and providing them with structured content and (if they were lucky) opportunities to practice in a simulated environment was blown away with the invention of the Web and the appearance of ubiquitous information sources.  Suddenly we had the ability to do a lot of things better, faster, more efficiently and more effectively – and often with higher levels of engagement and enjoyment.  It’s taken us a while to realise it, but that’s what happened. Why should I attend a product training course when I can watch a short video of an expert explaining the product and engage with her and my colleagues synchronously and asynchronously from wherever I happen to be – from my desk, from home, from the park or while I’m travelling? I can discuss my challenges, get hints and tips, ask for further explanations and heads-up about potential problems, and obtain feedback from people who have already been piloting it.

Is there any real reason why product training in classrooms still exists? What about systems training? Or training on that upgrade of our CRM tool that embeds some new processes?

Surely if I can obtain information and build my knowledge in more effective and efficient ways rather than attending a training course I should be doing that?

Of course we’re seeing massive changes in the way people learn many things as part of their normal workflow.  Learning and work are intermingling – workscapes describe this phenomenon. Who would ever contemplate attending a training course to learn how to construct a pivot table in Excel for instance? Ten years ago there may have been a good reason to do so. Now there is none. A quick search for ‘excel pivot tables’ on YouTube returns over 3,000 hits. Of course some may be less-than-useful (just as some of the classroom training courses we’ve all attended have been less than useful), but we quickly identify great teachers who upload their tutorials and which ones suit us.

If It’s Informational: Use the Web, Use Colleagues, Use the Intranet, but Don’t Use Training
If the requirement is mainly informational or simple instruction there’s absolutely no reason for anyone to leave the context of work to attend some form of course. Yet there’s still a whole industry inside training and development departments and an entire industry of training providers that exist simply to do just this. We must be crazy to put up with it. It’s as if we know that electricity’s been invented but choose not to use it for no reason other than it threatens our out-dated work practices and our 19th century thinking.

My old physics teacher used to tell us that when he was at school (about the time Ernest Rutherford was making his atomic discoveries) he was taught that atoms were indivisible, indestructible with hooks on them. He then taught us that isotopes were created when one of the Gabriel’s Angels returned to the production line after eating jam sandwiches for lunch and hadn’t washed the jam off her fingers…. 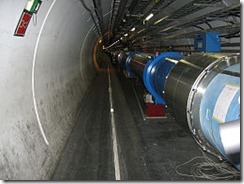 The announcement at CERN yesterday made me wonder whether some people working in training and development will still be clinging to the idea that training is the only, or best, answer to developing capability and performance long after it has passed its sell-by date for most purposes.

The invention of the Web, the rise and rise of social media, and our understanding that most learning happens in the workplace, have deflated that particular wave function some time ago – these three discoveries and developments are the Higgs boson of organisational learning.

(If you’re interested in seeing an excellent explanation of the Higgs bosun this is well worth a few minutes of your time http://vimeo.com/41038445 )